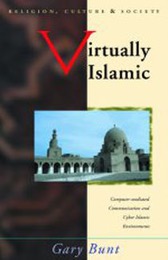 "Virtually Islamic is a tiny book packed with more information and insight per page than anything that I have encountered on the subject of religion and the Internet. There are many audiences who can benefit from reading this volume, but it is absolutely essential reading for students of religious movements. " Jeffrey Hadden, Journal of Contemporary Religion
﻿
"In the field of Islamic Studies at least, an easily navigable map of the many relevant Internet sites, together with an informed and intelligent commentary, is now available. Virtually Islamic should give anyone entering cyberspace a much greater sense of confidence and direction in looking for accurate and balanced information about Islam or Muslims ... Virtually Islamic should inspire us all to become more informed about, and better acquainted with, the exciting but sometimes frustrating world of the Internet." Sean McLoughlin, British Journal of Religious Education
﻿
" ... a valuable guide to things Islam on the Internet, especially to readers pondering technology's impact on religious identity or the ummah's urgent social, moral and political questions." Khoo Boo Teik, Asiaweek
﻿
"The book very nicely reflects the vast knowledge of the author both about Islam and the internet. It is a very beautiful and rare combination of conventional world of knowledge and the cyber information flow." The Statesman, Peshawar
﻿
"This is a creditable effort to assess the impact of technological change on Muslim societies. " Himal Magazine
﻿
"It is ... a valuable guide to things related to Islam on the Internet, especially to readers pondering over technology's impact on religious identity or the ummah's urgent social, moral and political questions." Islamic Voice
﻿
"Gary Bunt's Virtually Islamic: Computer-mediated Communication and Cyber Islamic Environments constitutes an important resource for scholars in the field who want to do further research on virtual Islam. It provides clear, well presented, interesting information for students in the field of Islamic and/or religious studies, and for those interested in the "identity effects" of the Net. " Resource Center for Cyberculture Studies
﻿
"Bunt, a lecturer in Islamic studies at University of Wales, has spent long hours in front of the computer screen (not much leg-work needed here!) and creatively analyzed the phenomenon of Islam online. The really new feature he finds is that anyone with access to the necessary technical equipment can set himself up as an authority on Islam, something radically at odds with the experience of centuries of Muslim history, when only those with credentials could do this." Middle East Quarterly
﻿
"... this remarkable book" ... "...exceptionally useful work", Professor Russell Blackwood, John Stewart Kennedy Professor of Philosophy, Emeritus and Lecturer in Religious Studies, Hamilton College.

"The author looks objective and unbiased while discussing different versions of Cyber Islam. There is hardly any evidence that shows ignorance of the author from the original teaching of Islam. This is due to his objective approach as he didn’t try to comment on controversial matters. Though, his objective reporting tone doesn’t destroy his creativity ... he articulate language of the book without any typographical error is a sign of eloquence and competence of a British author and the press respectively. He has conveyed his message in a coherent and logical manner ... On the whole, the book is a gift for Cyber Islamic Scholars who are involved in the development or reshaping of Cyber Islamic Ummah in one way or the other." The Nation, Pakistan
﻿
"Though the book under review was a significant work when it was first published in 2000, its importance has increased manifold in the aftermath of the 9/11 catastrophe ... It is indeed a highly intelligent effort to cover all aspects of what the author terms as Cyber Islamic Environments and it is bound to initiate dialogues and provide a platform for future work in this interesting area." Star Weekend, Pakistan.
﻿
﻿"Virtually Islamic is a useful book for a student of Islamic culture; the author's observations about the changes in Islamic culture which the Internet is creating make for interesting reading." First Monday
﻿
"Bunt has done a great service to Islamic Studies via the Internet and will serve as a torchbearer and a guide for further research in this area." IslamOnline
﻿
"Gary Bunt's Virtually Islamic is a pioneering work in Islamic studies, the first serious work on Islam and the Internet." Al-Ahram
﻿
"Bunt places what he calls cyber-Islamic environments at the heart of his scholarship." Chronicle of Higher Education
﻿
"It's not every day that a book about the internet emanates from a university's theology department¦ Virtually Islamic is the first wide-ranging study of the way Muslims around the world are using the net, and the impact this may have on Islam". Brian Whitaker, The Guardian
﻿
" ... original and highly fascinating work ... Clear and accessible, as well as authoritative, this is recommended to students, specialists and non-specialists alike." Dialogue
﻿
"Recommended for scholars, upper-division undergraduate and up, interested in the convergence of religion, popular culture, and technology in the modern world." Choice - Current Reviews for Academic Libraries, April 2001
﻿
"'Virtually Islamic' is a thorough and useful introduction to an aspect of Islamic culture and civilization which has, to date, been largely overlooked in academic work. " Islam and Christian-Muslim Relations
﻿
"Siegajac po te ksiazke mialem wiele watpliwosci. Napisac zwarta prace na temat islamu w Internecie wydawalo mi sie zadaniem niezwykle trudnym, zadaniem byc moze wartosciowym w sferze naukowej, ale mniej przydatnym dla zwyklych muzulman, czy ludzi zainteresowanych islamem. Dlaczego wartosciowym naukowo? "Arabia.pl, 14 February 2003, Polish review
﻿
Al-Quds Al-Arabi, 29 May 2001 Islamic Internet article (refers to Virtually Islamic)